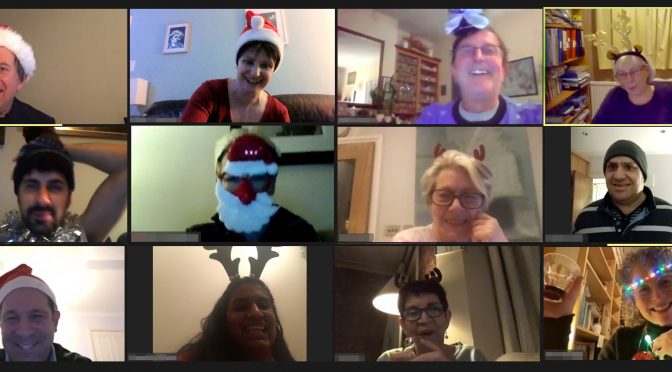 As this was our ‘festive meeting’ it was for everyone including all East Finchley organisations, shops, cafes, restaurants, traders, freelancers, groups, charities and businesses to share a drink and have some fun at the last meeting of the year.

Ho, ho, ho said our host as we settled in via Zoom (probably from home but there were a couple of suspect backgrounds…) for the N2United ‘Christmas Cracker’. Some with that Pu’erh tea we mentioned in our invite, most with wine and one with what looked like an energy drink… (Not sure the next 40 minutes were going to be that strenuous!) all wearing a jolly hat, some with rather fetching antlers!

This meeting was of course a departure from our usual Christmas meeting. Usually, we’d all be fighting over the last chicken wing or slice of quiche by 7pm in the Stag or The Clissold Arms, oblivious that Ali would arrive late (again) to try and wrestle the last remaining sandwich for herself in an unconscious attempt at beating her own record for the ‘most paid and least received’ award.

Determined to close a challenging year with at least some festive fun, attendees at this last meeting of the year also shared their favourite cracker jokes (see below) and heard from businesses and community organisations with their various updates.
In closing the meeting, thoughts turned to how the community, residents and business had come together to provide much need support during the tribulations of 2020. Our host thanked everyone and encouraged us all to build on this pointing out that in times of challenge, it’s our own communities that make the difference.
With that in mind, the N2United January 14th meeting will focus on bringing these elements closer together and encouraged everyone with a stake in the area, especially businesses and organisations, to join the meeting via Zoom and share their thoughts and ideas.

The meeting closed with a ‘toast’ to the fabulous community of East Finchley especially the key workers, Covid-19 support and all those supporting our new and unique makers, cafés, restaurants, shops and small businesses. Let’s keep supporting them in the way they supported us.

Project run by East Finchley Neighbourhood Support to feed disadvantaged families was launched on Tuesday 15th December.
With the help of Community Barnet and Grange Big Local (GBL) and the Phoenix Cinema as the distribution point, freshly cooked meals will be provided to local people who need them free of charge, with no questions asked or referral needed. Deliveries will also be made directly to local agencies who will help direct food to where it is most needed.

Find out more at: iloven2.co.uk/food-project

No change to current situation although in an email to Chris, Barnet Council say the scheme is temporary and remains under review.

Residents reported they saw just one bike over a two hour period on Tuesday 16th December, “all over the place not always in cycle lane, and the road traffic was appalling”. Reports showed that traffic backs up to North Hill, N6 by 3pm every day. It has been suggested that traffic lights may be re-phased ‘to try to help’ although there are concerns that will just shift the problems and jams to East End Road and Fortis Green instead!”.

Tarling Road Hub used to be called ‘the Old barn’, since knocked down and the hub built in its place. It offers spaces for hire including a large hall, offices and working spaces and is available for community activities. Small kitchen downstairs which could be developed into a café depending on the partnerships that develop – plenty of opportunities. Cleaning in place so is Covid-19 compliant, taking bookings from New Year.

Ruth has been talking with various small businesses especially those on the High Road. Issues continue around cycle lanes and lack of parking because of them and the CPZ extension in Twyford Avenue area as well as pavement studs. Ironically Barnet Council have installed large posters imploring the public to ‘shop local’!

However, noted that business rates have been waived until March and public parking restrictions are to be lifted on Saturdays during December.

#N2Unique is a list of East Finchley new or unique  shops, makers, cafés and small businesses and part of a local campaign to stimulate trade for local businesses particularly in the crucial run-up to Christmas. It’s hoped this will be inspiration for locally sourced seasonal gifts from new and unique shops, makers, cafés and small businesses. Many established and up and coming new businesses are taking part. If anyone knows of businesses who could benefit from participating, they should get in touch with N2United and support the ‘#N2Unique’ campaign by using the hash tag on their own social media posts.

Reported the trust has been quiet all through Lockdown and doubts there will be a meeting before spring.

The Archer newspaper is run, written and managed by volunteers and has been a longstanding supporter of the area and N2United and has recently been promoting the #N2Unique campaign – see #N2Unique. If you are interested in participating in the newspapers coverage or to express your views in The Archer, write a letter, send an article or join our soapbox. We’ve kept going throughout the pandemic and intend to continue. Stories are East Finchley community based.
Big piles of copies available for collection in Budgens and at the tube station.

On the 8th December, Jack Dorsey, CEO and founder of Twitter gave $15 million (£11.2million) to fund a Universal Basic Income (UBI) programme for 30 US cities which energised the second conversation on the potential for a similar, albeit smaller trial in East Finchley on the 9th of December.

The discussion centred on how a scheme would work in East Finchley and if introduced, what people would spend the proposed £100 a week on. The money would be paid unconditionally to everyone in work or not, without bias of gender, family structure or size of household including to those not usually seeking eligible for financial support including CEO’s and millionaires. Further conversations are planned and again local residents are encouraged to share their thoughts about the value of a trial of UBI in East Finchley via email to info@grangebiglocal.org

We are awaiting government guidelines about when the cinema can re-open. Better news that the cinema has been awarded £126,328 from Culture Recovery Fund. The Phoenix said, “This support will be invaluable in allowing us to keep our doors open and we are so grateful to @BFI for recognising our work and place in the community”.

Historically, we have always seen an increase in number visiting us for support in January and February and donations usually dip at this time, so that is a worry for the New Year.

We didn’t get chance for our quiz which included these questions (answers will be on our website after Christmas).

6.             Which pub has a blue plaque inside commemorating where The Archer newspaper started?

N2United are inviting community organisations to participate in an ‘Organisers’ Calendar for them to add the  dates of their public activities to avoid clashes with local events, meetings etc.
To get access, email calendar@n2united.co.uk

N2United are inviting community organisations to get listed in a local directory of all organisations and businesses in East Finchley.
To get included, see n2united.co.uk/listing

The winners of the various competitions all agreed that their winnings would be donated to a local charity.

The regular meeting on the 14th January 2021 will again be for everyone to discuss, share and plan how we can all help each other next year.

N2United aims to help bring everyone together to enable them to share their news, get support or promote their organisation or business.

Everyone with a stake in the area, especially businesses and organisations are encouraged to join the meeting (via Zoom) and share their thoughts and ideas.

For details of the January meeting, see n2united.co.uk.

Thanks to everyone for their attendance through the year especially to The Archer, Phoenix Cinema, East Finchley Community Facebook Group and all of the N2United committee and volunteers.

Get FREE updates from the N2United Community and Business Network